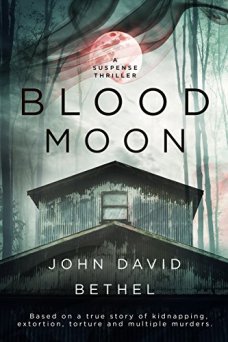 Buy your copy from Amazon

The preface is a note from the lone survivor and it is purely heartbreaking.The fact this book was based on a true story is kind of scary, to be completely honest.

Bethel wastes no time getting to the nitty gritty details of the story and the pace stays this was pretty much throughout the whole book. My anxiety was super high reading this. It was most definitely suspenseful and thrilling, for those of you who love that genre!

As you can see from the cover, this book is about the kidnapping and extortion of a man named Recidio Suarez. Reading about the torture that this man suffered was really hard, but necessary at the same time. I found myself shaking my head at different points in the story because I just couldn’t believe the things that Suarez was put through. If I were put in his position, I’m not sure I could survive. Suarez is definitely one tough man.

One of the things that really bothered me was the reasoning behind kidnapping and torturing this man. The primary motivation was because Suarez “stole” from his business partner. This is beyond ridiculous because you cant steal what is already (and rightfully) yours.

What’s even more aggravating is how many of these men jumped on the bandwagon and willingly helped enact the torturing of a man they didn’t even know. All of these men were so easily swayed to help based on the amount of money they would be able to extort from Suarez. Didn’t think you could put a price on your life and your freedom. These men were so gullible that none of them even mentioned how off the wall the reasoning and the plan was. It’s really hard for me to wrap my head around that. But the worst criminals are super smart and super stupid all at the same time. I think Bethel embodied these men very well.

I was extremely disappointed by “Big Hands” as Suarez called him because he was blind folded throughout the month of his torture. I had hope for “Big Hands”. I just knew he would be the one to break the mold and do the right thing. But NOPE. I just couldn’t understand how he could be so nice to Suarez all the time, but wasn’t willing to help him escape in any sort of way. He was definitely not like the other involved in this horrific plan.

This story also contains a stroke of God and pure luck. It’s the only way to explain how Suarez becomes the “lone survivor”. The people that tortured him are pure insane! Their attempt at getting rid of the evidence after they finished the plan was fool proof (ALMOST). All I can say is what a LUCKY mother trucker. 🙂

You would think that after being tortured and everything else Suarez had been through, that it would be over after his kidnappers were done with him. Guess again. Poor guy now has to suffer through ANOTHER kind of torture. When he wakes up in the hospital, nobody will listen to him about what happened to him and they just think he is crazy. My heart seriously was being tortured FOR him.

When we FINALLY meet Lina (Suarezes wife), she is NOTHING like she had been described by husband. She was smart enough to pick up on all of his “tells” and is very stern with people in order to protect her husband. She’s a strong woman and does what needs to be done to get JUSTICE for her husband.

Suarez attempts to take all of the evidence to the proper authorities and the PD literally tosses it aside. What the heck? Even with all of that evidence. After the next victim, they will be wishing they hadn’t done that. Especially he’s a much BIGGER fish in the grander scheme of things.

This book definitely addresses the serious flaws within the American justice system and those who are entrusted to protect and serve the citizens. This is just one example of where they fail tremendously. Unfortunately, it is shamefully true.

However, in the end everyone gets EXACTLY what they deserve. Some more so than others. 😉

In my opinion, this book would be a good read for everyone. Especially if you love suspense/ thrillers or if you like stories based on true events with just enough details thrown in there to make it fiction.

So tell me, does this book sound interesting to you?